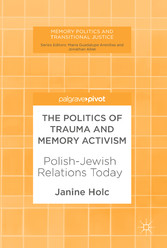 The Politics of Trauma and Memory Activism - Polish-Jewish Relations Today

The Politics of Trauma and Memory Activism - Polish-Jewish Relations Today

This book analyses four case studies of Holocaust memory activism in Poland, contextualized within recent debates about Polish-Jewish relations and approached through a theoretical framework informed by critical theory. Three cases are advocacy groups, each located in a different region of Poland-Lublin, KrakÃ³w, and Sejny-and each group is presented with attention to the local context and specific dynamics of its vision and strategy. The fourth case study is the state, which has emerged as a powerful memory actor. Using research based on extensive fieldwork, including interviews and direct observation, the author argues that memory activism must grapple with emotional attachments to identity if it is to move beyond a reconciliation paradigm. Drawing on works from semiotics and critical trauma studies, the volume analyzes the assumptions each memory actor makes about three dimensions of Holocaust memory: 1) the relationship of the individual to Polish national identity; 2) the possibility of a reconciled Polish-Jewish history; and 3) the assignment of traumatic suffering to a particular group or event.