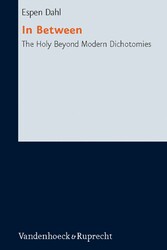 In Between - The Holy Beyond Modern Dichotomies

In Between - The Holy Beyond Modern Dichotomies


Thanks to the recent Â»return to religionÂ«, the holy has become a relevant issue in public debate, as is suggested by concepts such as Â»re-sacralizationÂ« and Â»re-enchantmentÂ«. Holy war and religiously motivated terrorist attacks, the fascination in popular culture for subjects such as the Holy Grail (as in Dan Brown's Da Vinci Code), new spiritual longings both within and outside institutional religion - all testify to the new religious climate. This situation calls for a reassessment of both classical and new theories about the holy.Espen Dahl offers a theoretical account of the holy. Central to its approach is the idea that the holy cannot be reduced to one stable essence, but is fundamentally composite and takes place Â»in betweenÂ«. This means that the typical modern dichotomies between the holy and the profane, the pure and the impure, the pious and the violent, cannot be drawn as sharply as scholars once did. Instead, the manifestation of the holy takes place in the interstice between those spheres. Such a position is not strong - it attests to the weakness of the holy. Through a critical dialogue with the most influential recent contributions, various theories and responses to them are presented on the basis of the book's overall perspective.Espen Dahl deals with various theoretical perspectives, corresponding to the numerous dimensions of the holy. Phenomenology plays the principal role, because it offers the best means to preserve the experiential dimensions which are essential to the holy. From this perspective, the book discusses theories from religious science, theology, philosophy, and psychology.