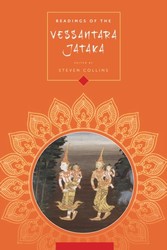 Readings of the Vessantara Jataka

Readings of the Vessantara Jataka

The Vessantara Jataka is one of the most popular and influential Theravada Buddhist texts and the final and longest scripture in the Pali Canon. It tells the story of Prince Vessantara, who attained the Perfection of Giving by giving away his fortune, his children, and his wife. Prince Vessantara was the penultimate rebirth as a human of the future Gotama Buddha, and his extreme charity is frequently portrayed in the sermons, rituals, and art of South and Southeast Asia.This anthology features sophisticated literary and anthropological analyses of the ethics of giving, understanding of attachment and nonattachment, depiction of the trickster, and unique performative qualities of the Vessantara Jataka. Contributors to the volume include well-respected anthropologists, textual scholars in religious and Buddhist studies, and art historians who unravel from multiple perspectives the texts morality, religion, and place in contemporary academic debates. These experts show the Vessantara Jataka to be as brilliantly layered as a Homerian epic or Shakespearean play, with aspects of tragedy, comedy, melodrama, and utopian fantasy intertwined to problematize and scrutinize Buddhisms cherished virtues. Unusual for its disciplinary range, this collection helps recast Buddhism as a human tradition rich in ethical and aesthetic complexity. It also features an introduction describing the works main themes and styles, a character glossary, and a bibliography.