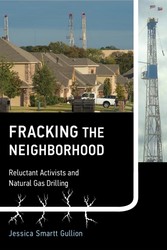 When natural gas drilling moves into an urban or a suburban neighborhood, a two-hundred-foot-high drill appears on the other side of a back yard fence and diesel trucks clog a quiet two-lane residential street. Children seem to be having more than the usual number of nosebleeds. There are so many local cases of cancer that the elementary school starts a cancer support group. In this book, Jessica Smartt Gullion examines what happens when natural gas extraction by means of hydraulic fracturing, or ",fracking,", takes place not on wide-open rural land but in a densely populated area with homes, schools, hospitals, parks, and businesses. Gullion focuses on fracking in the Barnett Shale, the natural-gas--rich geological formation under the Dallas--Fort Worth metroplex. She gives voice to the residents -- for the most part educated, middle class, and politically conservative -- who became reluctant anti-drilling activists in response to perceived environmental and health threats posed by fracking. Gullion offers an overview of oil and gas development and describes the fossil-fuel culture of Texas, the process of fracking, related health concerns, and regulatory issues (including the notorious ",Halliburton loophole",). She chronicles the experiences of community activists as they fight to be heard and to get the facts about the safety of fracking.Touted as a greener alternative and a means to reduce dependence on foreign oil, natural gas development is an important part of American energy policy. Yet, as this book shows, it comes at a cost to the local communities who bear the health and environmental burdens.