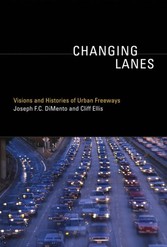 Urban freeways often cut through the heart of a city, destroying neighborhoods, displacing residents, and reconfiguring street maps. These massive infrastructure projects, costing billions of dollars in transportation funds, have been shaped for the last half century by the ideas of highway engineers, urban planners, landscape architects, and architects -- with highway engineers playing the leading role. In Changing Lanes, Joseph DiMento and Cliff Ellis describe the evolution of the urban freeway in the United States, from its rural parkway precursors through the construction of the interstate highway system to emerging alternatives for more sustainable urban transportation.DiMento and Ellis describe controversies that arose over urban freeway construction, focusing on three cases: Syracuse, which early on embraced freeways through its center, Los Angeles, which rejected some routes and then built I-105, the most expensive urban road of its time, and Memphis, which blocked the construction of I-40 through its core. Finally, they consider the emerging urban highway removal movement and other innovative efforts by cities to re-envision urban transportation.