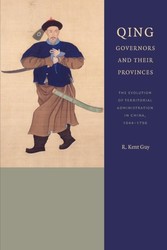 Qing Governors and Their Provinces - The Evolution of Territorial Administration in China, 1644-1796

Qing Governors and Their Provinces - The Evolution of Territorial Administration in China, 1644-1796

During the Qing dynasty (16441911), the province emerged as an important element in the management of the expanding Chinese empire, with governors -- those in charge of these increasingly influential administrative units -- playing key roles. R. Kent Guys comprehensive study of this shift concentrates on the governorship system during the reigns of the Shunzhi, Kangxi, Yongzheng, and Qianlong emperors, who ruled China from 1644 to 1796.In the preceding Ming dynasty (13681644), the responsibilities of provincial officials were ill-defined and often shifting, Qing governors, in contrast, were influential members of a formal administrative hierarchy and enjoyed the support of the central government, including access to resources. These increasingly powerful officials extended the courts influence into even the most distant territories of the Qing empire.Both masters of the routine processes of administration and troubleshooters for the central government, Qing governors were economic and political administrators who played crucial roles in the management of a larger and more complex empire than the Chinese had ever known. Administrative concerns varied from region to region: Henan was dominated by the great Yellow River, which flowed through the province, the Shandong governor dealt with the exchange of goods, ideas, and officials along the Grand Canal, in Zhili, relations between civilians and bannermen in the strategically significant coastal plain were key, and in northwestern Shanxi, governors dealt with border issues.Qing Governors and Their Provinces uses the records of governors appointments and the laws and practices that shaped them to reconstruct the development of the office of provincial governor and to examine the histories of governors appointments in each province. Interwoven throughout is colorful detail drawn from the governors biographies.