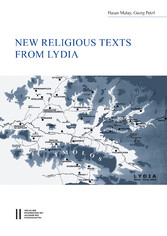 
The ancient area of Lydia has yielded a particularly rich epigraphical harvest of Greek-Roman Antiquity. Inscriptions were found on the surface of ancient sites, during archaeological excavations or discovered in the course of construction work. Over the past decades Hasan Malay (former professor at the Ege University, Izmir) travelled frequently in that region and took copies and photographs of many inscribed stones which were often brought to his attention by inhabitants of remote villages; he also arranged the stones' transport to museums. Further inscriptions were brought to light during a rescue excavation organised by him of the sanctuary of Thea Larmene. From this collection Hasan Malay and Georg Petzl (former professor at the Cologne University) present in this ETAM volume more than 200 unpublished inscriptions, which refer to the religious life. The earliest ones belong to the Hellenistic period, the majority of them were written in the Roman Imperial period, the latest ones date from the Christian Antiquity. The texts belong to various categories: A Lex Sacra, a report on the financing of the mysteries of Artemis, a hymn, a number of oracles, boundary stones, honorific, building and funerary inscriptions, and, above all, dedications, amongst which a good number of 'confession inscriptions' (with the so far only one written in verses). The material is presented according to a geographical order, the accompanying map helps to locate the individual sites. A number of rural sanctuaries are dealt with in special chapters (XVI; XXI-XXIII; XXV); anepigraphic finds (reliefs and sculptures), which were made in these places, are attached in appendices. All the documents - many of them outstanding in novelty - are illustrated by photographs, translated and furnished with commentaries. Detailed indices will be welcomed by the reader wishing to get an overview of the rich material.