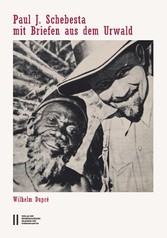 
Paul Schebesta (1887-1967), one of the outstanding cultural anthropologists of the previous century, undertook six expeditions between 1924 and 1955 in order to do fieldwork among the Semang in Malaysia and the Aeta in the Philippines on the one hand, and among the Bambuti, Efe, and other gatherers and hunters in Central Africa on the other hand. Schebesta published detailed travelogues of his expeditions and left a comprehensive amount of academic works and papers. The travelogues published in the interbellum have also been translated into English. Yet, who was Schebesta, how developed his life, what motivated him, how did he understand himself and his task - as a human being, but especially as a scholar who considered the exploration of the cultures of these people as his scientific life-task? The present book tries to answer these and many more questions. The attempt to accomplish this goal is strongly supported by letters which Schebesta wrote to Vienna during his expeditions since 1929. As documents of personal behavior and attitudes the letters permit today's readers to observe and assess the fieldworker from close-by. At the same time, they raise not only questions about one's own and other cultures, but attest also to the crucial importance of cultural contemporaneousness and non-contemporaneousness within the context of interhuman encounters.