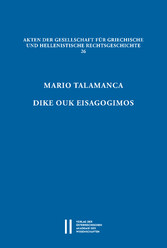 
After the democratic restoration in 403 BC a defendant was allowed to oppose a statement (paragraphe) that the case could not be brought to trial on formal grounds. Some scholars believe that the formal question was decided by the court as a separate preliminary case; for other scholars the two questions - the formal one and the material one - were considered together: if the paragraphe was defeated, the jurors passed directly to a vote on the case itself. The author discusses carefully the various opinions on the subject and presents his own solution, based on a cautious analysis of the ancient sources: in a single vote the jurors decided if the defendant's paragraphe or the plaintiff's plaint was winning the case.