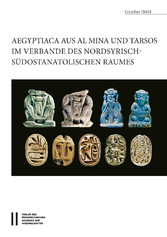 
The diffusion of Egyptian type objects throughout the Mediterranean is a chief research topic of the author. In this volume, preceded by summarising presentations of Aegyptiaca from Archaic Italy, Phoenician-Punic Sardinia, and from the Maltese islands, there are presented for the main part the up to now unpublished amulets and scarabs from Al Mina situated at the mouth of the river Orontes (today in Turkey). Extensive comments with comparative material from Egypt and the whole Mediterranean along with the photographic documentation partly in colour elucidate the single pieces. These come from the excavations undertaken by Sir Leonard Woolley during the years 1936 and 1937 and were brought mostly to Antakya, but also to the Ashmolean Museum at Oxford and to the British Museum, London. The scarabs from Tarsus reconsidered (excavations Hetty Goldman, 1934-38) as well as scattered finds of scarabs made accessible to the writer in the museums of Adana and Gaziantep are added to the catalogue. These should serve for a better understanding of the cultural and commercial interconnections mediated by the Aegyptiaca. The author's special objective is also to demonstrate the cultural position of the Egyptian type objects presented in the catalogue within the wider territory around the Gulf of Iskenderun during the Neo-Hittite and Neo-Assyrian Periods. For this purpose could be used the finds from the Tells of the Amuq-Plain (in the hinterland of Al Mina), brought to light by the American missions of the thirties of the last century, not yet published but studied by the writer.