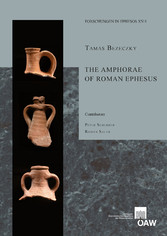 
Most of the 621 amphorae discussed in the book come from the Ephesian Tetragonos Agora with lesser amounts from a range of sites both within the town and beyond. The work begins with a brief historical background providing the reader with an idea of the context of the material under study. This is followed by a detailed description and analysis of the archaeological context of each of the eight sites at which material was found, with a particular focus on the stratigraphic context (contribution by Peter Scherrer). Chapter 3, concerning the Ephesus and Cayster Valley Food and Amphora Production, provides evidence (petrology and epigraphy) for the existence of an Ephesian amphora production extending between the Hellenistic and Late Roman periods: since these types are widely distributed they offer a touchstone for characterizing the distribution of Ephesian agricultural products across the Mediterranean. The main body of the book is a type-by-type description of all the seventy amphora types encountered during the study. This part focuses upon form, chronology, contexts at Ephesus, epigraphy (stamps), origins, contents, distribution, fabric (and petrology), and a catalogue of identified pieces. The different types of amphorae present at Ephesus are subdivided into the Late Hellenistic, Early Roman, Mid-Roman and Late Roman periods, providing us for the first time with an idea of the main periods of amphora-based commercial activity at Ephesus, as well as of the relative importance of the different production areas in the commercial life of the city. The book is then rounded off by a discussion of the petrology by Roman Sauer (Chapter 7), and is complemented by appendices on two different classes of stamped amphorae (Appendices I and II) and an extensive bibliography.