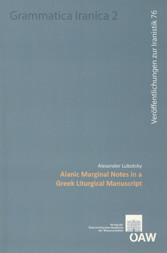 
The book represents the first publication of the complete corpus of Alanic marginal notes in a 13th century Byzantine manuscript from the Library of the Academy of Sciences in Saint Petersburg. This manuscript is a Greek Old Testament lectionary, or Prophetologion, which at one point was owned and used by an Alanic priest who had learned to read and write Greek, but felt the need to identify the feasts in the margin of his manuscript, because he could not easily find them by skimming the text. For this purpose, he wrote an abbreviated heading of his own in the margin, next to the full heading of the manuscript. There are altogether 34 marginal notes in the manuscript (24 Alanic, 9 Greek, and 1 mixed). In this edition, every note is followed by the Greek heading, to which the note refers, its translation, and a black-and-white photograph. Then, a short outline of the liturgical context is provided, when necessary, followed by paleographic comments and an analysis of the meaning of the note and its linguistic structure. The edition of the notes ends with a discussion of the spelling conventions and the language of the notes and with an appendix on the Alanic text in Tzetzes' Theogonia. The book is further provided with full-color photographs of all pages containing marginal notes.