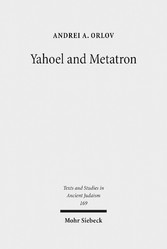 
In this work, Andrei A. Orlov examines Jewish apocalyptic traditions about the angel Yahoel, tracing their conceptual impact on the development of later rabbinic and Hekhalot beliefs concerning the supreme angel Metatron. The author argues that the figure Yahoel, who became associated in Jewish apocalypticism with the distinctive aural ideology of the divine Name, provides an important conceptual key not only for elucidating the evolution of the Metatron tradition, but also for understanding the origins of the distinctive aural ideology prominent in early Jewish mystical accounts. Andrei A. Orlov suggests that the aural mould of Jewish apocalypticism exercised a decisive and formative influence on the development of early Jewish mysticism.