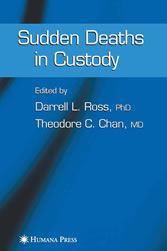 Sudden in-custody restraint deaths have emerged as a critical and imp- tant problem for police, correctional, and medical care workers. The scope and magnitude of the problem clearly reveals that the subject matter is worthy of further consideration. Although the frequency of these deaths is very low, the criticality of its occurrence requires attention to the subject matter. The purpose of Sudden Deaths in Custody is to provide current information that addresses the issue from a number of perspectives. It is our purpose to assemble, under one title, current research that addresses the varying facets that underscore the nature of sudden in-custody deaths. The intent is to provide information that can further educate and assist those officers, adm- istrators, investigators, trainers, and medical personnel who must interact, intervene, and make decisions about how to prevent sudden in-custody deaths. Sudden Deaths in Custody specifically addresses sudden in-custody deaths that occur after a violent confrontation. Such incidents may occur after police or correction officers' intervention, but also include incidents that may occur in a mental health facility or emergency medical field setting. The deaths described in this volume all involve sudden death within minutes or hours of contact preceded by one or more of the following: violent confrontation with police or corrections personnel, forcible control measures, and behavior inf- enced by a chemical substance, or mental impairment. Incidents involving custodial suicides, homicides, accidents, fatal pursuits, or police shootings are excluded.