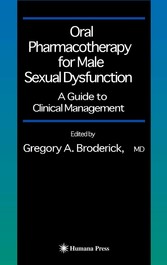 For the generation that reached sexual maturity in the 1960s, the 'pill' became synonymous with sexual freedom and started a sexual revolution. For women it meant freedom from the fear of pregnancy, and for men enhanced sexual opportunity. The new era of the pill has nothing to do with fertility, but everything to do with sex. The first orally effective prescr- tion drug for treating erectile dysfunction (ED) was marketed in 1998. Â® Sildenafil (Viagra ) has rejuvenated the aging male veterans of the sexual revolution, forever changed the science of sexual medicine, and tra- formed society's perspective on aging and sex. This class of drugs, known as oral phosphodiesterase inhibitors (PDE-type 5), is highly effective in the treatment of ED. Since its introduction there has been a much greater awa- ness of ED, its comorbidities, and its effects on the quality of life. In 1997, while preparing to address the Endocrine Society on the occasion of the 92nd American Urological Association meeting, I first looked at the p- clinical studies of sildenafil. I thought 'this will change everything' and it clearly has-changing practice patterns in sexual medicine, and the at- tudes of patients, potential patients, and their partners. Two new PDE-type Â® Â® 5 inhibitors, tadalafil (Cialis ) and vardenafil (Levitra ), were first approved by the European Committee for Proprietary Medicinal Products and subsequently by the Food and Drug Administration in 2003 and 2004.