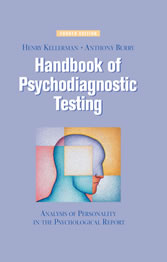 Handbook of Psychodiagnostic Testing - Analysis of Personality in the Psychological Report

Handbook of Psychodiagnostic Testing - Analysis of Personality in the Psychological Report

The Handbook of Psychodiagnostic Testing is an invaluable aid to students and professionals performing psychological assessments. It takes the reader from client referral to finished report, demonstrating how to synthesize details of personality and pathology into a document that is focused, coherent, and clinically meaningful.
This new edition covers emerging areas in borderline and narcissistic pathologies, psychological testing of preschool children, and bilingual populations. It also discusses the most current clinical issues and evaluating populations on which standard psychological tests have not been standardized.


Henry Kellerman, Ph.D, Diplomate in clinical Psychology of the American Board of Professional Psychology, is training alalyst and senior supervisor at the Postgraduate Center for Mental Health in New York City. He is the author and editor of many books and numerous scientific papers and was the editor of the Columbia University Press book series Personality, Psychopathology, and Psychotherapy: Theoretical and Clinical Perspectives. A former National Institute of Mental Health Fellow, Dr. Kellerman is also a Fellow of th American Psychological Association and the American Group Psychotherapy Association. He has held faculty and staff positions at several hospitals and universities and maintains a private psychoanalytic practice in New York City.
Anthony Burry, Ph.D., clinical psychologist and psychoanalyst and Diplomate, American Board of Assessment Psychology, was formerly the Director of Psychology Internship Training, supervisor, and faculty memeber at the Postgraduate Center of Mental Health in New York City. Dr. Burry was also the Director of Psychological Evaluation at Comprehensive Psychological Services, and a Senior Supervisor of school mental health programs at the Brooklyn Center for Psychotherapy. He was Director of Psychology at Community Services for Human Development in New York City and was also a consultant in psychological assessment for seminary education for the Roman Catholic Diocese of Brooklyn. Dr. Burry has also held clinical positions involving psychotherapy and psychodiagnostic testing at St.Vincent's Guidance Institute in New York City and at the University of Kentucky Medical Center and the Veterans Administration Hospital in Lexington, Kentucky.  Dr. Burry maintains a private practice in psychotherapy and Psychodiagnostic testing in New York City.