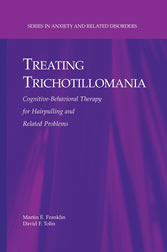 There is still scant clinical information on trichotillomania. This book fills the need for a full-length cognitive-behavioral treatment manual. The authors share their considerable expertise in treating body-focused repetitive behavior disorders (not only hair-pulling but skin-picking and nail-biting as well) in an accessible, clinically valid reference. This is the first comprehensive, clinical, and empirically-based volume to address these disorders.


Martin E. Franklin, Ph.D., Associate Professor of Clinical Psychology in Psychiatry and Clinical Director of the Center for the Treatment and Study of Anxiety at the University of Pennsylvania School of Medicine, received his Ph.D. in clinical psychology from the University of Rhode Island in 1993. Dr. Franklin joined the Center's faculty in 1992 upon completion of his clinical internship at the Medical College of Pennsylvania/Eastern Pennsylvania Psychiatric Institute. His scholarly publications include scientific articles and book chapters on the treatment of adult and pediatric OCD, social phobia, trichotillomania, PTSD, and readiness for behavior change. He was a member of the Expert Consensus Panel for Obsessive Compulsive Disorder that assisted with the development of treatment guidelines for adult and pediatric OCD. Dr. Franklin is a co-investigator and clinical supervisor on the Center's ongoing NIMH-funded randomized controlled trials in pediatric OCD, adult OCD, and social phobia.
David F. Tolin, Ph.D., is the founder and Director of the Anxiety Disorders Center at The Institute of Living. He is also Assistant Professor of Psychiatry at the University of Connecticut School of Medicine. Dr. Tolin received his Ph.D. from the University of Arkansas, and completed a predoctoral internship at Tufts University School of Medicine/VA Medical Center, Boston. Dr. Tolin's research and clinical interests include cognitive-behavioral therapy for anxiety disorders in adults and children, and cognitive processes that underlie anxiety disorders, particularly obsessive-compulsive disorder, posttraumatic stress disorder, and panic disorder. He is the recipient of the award for Distinguished Contribution to the Science of Psychology from the Connecticut Psychological Association, and an Early Career Award from the Anxiety Disorders Special Interest Group of the Association for Advancement of Behavior Therapy. He is a Fellow of the Council for Scientific Medicine and Mental Health.
Dr. Tolin is the author of over 90 journal articles and book chapters, and over 140 research presentations to national and international organizations. Dr. Tolin is principal investigator on the National Institute of Mental Health (NIMH)-funded studies 'Stepped Care for Obsessive-Compulsive Disorder' and 'Neural Mechanisms of Compulsive Hoarding,' and co-investigator on the NIMH-funded studies 'Psychopathology of Compulsive Hoarding' (principal investigator: R. Frost), 'Treatment of Compulsive Hoarding' (principal investigator: G. Steketee), and 'Screening for GAD among Frail Elderly' (principal investigator: G. Diefenbach). He has served as principal investigator on several industry-sponsored clinical trials of experimental medications. Dr. Tolin has been interviewed for The New York Times and the Associated Press, and has been a recurrent guest on The Today Show, Good Morning America  and The Oprah Winfrey Show.