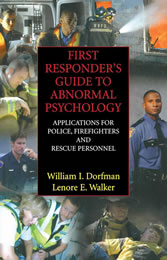 This book gives readers critical insights into the human impact of extreme trauma, and the various levels of mental impairment suffered by both victims and survivors. Renowned trauma experts William Dorfman and Lenore Walker give this book immediate relevance through the use of real-life examples from a wide range of crisis situations. They have also deliberately minimized research citations within the text for greater readability.

William I. Dorfman, Ph.D., ABPP is Professor of Psychology and Associate Director of Clinical Training in the Center for Psychological Studies, Nova Southeastern University.  He was formerly the Executive Director of Nova Southeastern University's Community Mental Health Center and Chief Psychologist of its APA-approved Internship in Clinical Psychology.  Prior to coming to the Center for Psychological Studies, Dr. Dorfman was Executive Director of the Rockbridge Area Community Mental Health Center in Lexington, Virginia where he also taught at Washington and Lee University and the Virginia Military Institute.  From 1972-1977, while serving in the U.S. Army Medical Service Corps, he was Director of Training of an APA-approved community-clinical internship at Fort Ord, California. Dr. Dorfman who attained the rank of Major before leaving reserve duty consulted with several military organizations including the Military Police and post hospital installations.
Dr. Dorfman received his Bachelor of Science degree, Magna Cum Laude, from the University of Scranton and his Master of Arts and Doctor of Philosophy degrees in Psychology from the Ohio State University.  He is a licensed psychologist in Florida, a member of the National Register of Health Service Providers in Psychology and is Board Certified in Clinical Psychology by the American Board of Professional Psychology.
Dr. Dorfman is active in the education and training of professional psychologists and has published his work in professional journals and books and presented at scientific meetings in the areas of assessment of personality, treatment of the seriously mentally ill and their families, psychopathology, clinical interviewing and the evaluation of trainees' attitudes toward managed health care systems and brief therapy.  He has served as a consultant to Broward County Florida' Sheriff's Department in training detectives on interviewing mentally disturbed subjects and serves as a consultant to the county Crisis Intervention Team. Dr. Dorfman has made numerous radio and television appearances, including the Oprah Winfrey Show, and '360' with Anderson Cooper discussing mental health issues.
Dr. Lenore E. Walker is a clinical and forensic psychologist who currently is a full time professor of psychology at Nova Southeastern University at their Center for Psychological Studies where she coordinates the forensic psychology concentration with the doctoral students.
She has been in the independent practice of psychology for over 30 years and currently practices forensic psychology on a part-time basis. She pioneered the use of BWS in courts of law, first helping juries understand how a battered woman could fail to leave a battering relationship and then, provided testimony on why a battered woman might be justified in killing her abuser in self-defense. She frequently testifies on the emotional impact of interpersonal violence (physical, sexual, and/or psychological abuse) on victims.

Walker received her Ed.D. degree in psychology from Rutgers, The State University in New Jersey in 1972, her MS in psychology from CCNY and AB from Hunter College, both of the City University of New York. She recently earned a MS in Clinical Psychopharmacology from NSU. She has authored 10 books and over 50 professional articles on the topics of trauma from interpersonal violence and gender issues, especially multicultural, feminist and survivor therapy systems.

She is invited by governments and organizations around the world to speak on the topic of domestic violence, and frequently presents workshops on the topic.