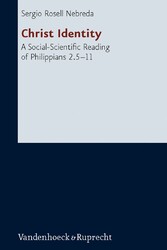 Sergio Rosell Nebreda focuses on how the Philippian Christ-followers received Paul's letter. The social, historical, literary, rhetorical, anthropological and theological elements are dealt with in order to understand the effect Paul wanted to achieve.The main thesis of the book is that the apostle Paul, who greatly suffered at Philippi, and writing from a prison, desires to affect the Philippians believers to acquire a Christ-orientation based on the values expressed in the Christ-hymn. Phlp 2, 5-11 forms the core of Paul's theological narrative that aims at constructing a sense of imitatio and conformatio in the Christ-following community. Paul uses a 'friendly' style in his letters in order to produce rapport and trust in the community, presenting himself as examplum ad imitando, after that of Christ. It is because Paul so fully identifies with Christ's orientation in life that the apostle presents himself as a slave of Jesus Christ.In the midst of a society ill with the desire for honour and power, the Christ narrative stands as a radical call for an alternative life-style, based on the exercise of humility which seeks the interest of others rather than focusing on one's own needs and desires. Paul insists on the basis of the Christ-hymn that such a life-style reveals God's character and it is therefore a life rewarded. Through the use of Social Identity Theory this book evaluates how ancient people constructed their group identity in daily life and how through a seemingly inferior model (that of Christ's kenosis in 2, 5-11) the community receives a re-definition of values which are according to God's values, and who has the last word in history. Paul thus presents an alternative and viable way of life in the midst of a society he knows well.