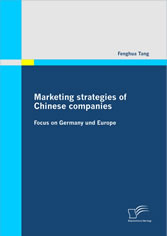 Ten or fifteen years ago global business was mainly in the hands of a select number of multinational giants. Small and medium-sized business concentrated on their home markets and perhaps one or two neighboring countries. Not so any longer. Even the smallest businesses have realized that they have something to market in distant countries. Under these circumstances, Chinese companies of all sizes in various industries have recently opened to foreign competition. According to the Chinese Commerce MinistryÂ´s new release on relevant report, the Chinese foreign investment reached a new record of 26,51 billion US-Dollars in 2007. This represented a growth of 25,3 percent compared to 2006. After the quantity expansion, the quality offensive comes silently. Today, Chinese companies throw not only millions of T-Shirts, toys or plastic bowls in the international market but also wireless LCD-televisions, telecom-equipment and precision tools as well. Chinese companies have realized that a competitive advantage based on low costs, low prices and large quantities in a global economy cannot defend itself long. Consequently, they focus consistently on innovation and brands. In addition, ChinaÂ´s globalization also needs strong mental forces. China does not just want to be a world factory, but instead be an internationally competitive market place that Western competitors already are.
In the involvement of Chinese companies abroad aimed at specific markets, several strategies are recognizable. German and European companies are facing new chances and challenges at the same time. People must correctly assess the situation and corporate strategies and business concepts, with which they respond effectively and sustainably. The following questions are the focus:
In what areas and branches do Chinese companies concentrate in German market?
Which Chinese companies go abroad? What are their market entry strategies? What are their competitive strategies? And what are the steps of Chinese investments?
What problems in the Chinese M&A business in Germany? How to overcome or avoid them? What are other problems?
What branches are suffering from Chinese competition in Germany and EU? Chances or threats? How can German companies face this shift in a global economy and respond appropriately?