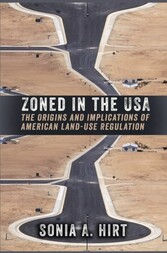 Why are American cities, suburbs, and towns so distinct? Compared to European cities, those in the United States are characterized by lower densities and greater distances, neat, geometric layouts, an abundance of green space, a greater level of social segregation reflected in space, and-perhaps most noticeably-a greater share of individual, single-family detached housing. In Zoned in the USA, Sonia A. Hirt argues that zoning laws are among the important but understudied reasons for the cross-continental differences. Hirt shows that rather than being imported from Europe, U.S. municipal zoning law was in fact an institution that quickly developed its own, distinctly American profile. A distinct spatial culture of individualism-founded on an ideal of separate, single-family residences apart from the dirt and turmoil of industrial and agricultural production-has driven much of municipal regulation, defined land-use, and, ultimately, shaped American life. Hirt explores municipal zoning from a comparative and international perspective, drawing on archival resources and contemporary land-use laws from England, Germany, France, Australia, Russia, Canada, and Japan to challenge assumptions about American cities and the laws that guide them.