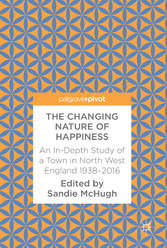 This book shines a light on the meaning of happiness and how public perceptions of it have changed over time. A question that has engaged philosophers from the days of Aristotle, happiness is a subject of growing academic interest, and its recent integration into government policy is provoking increased debate into its definition and nature. Sandie McHugh and her associates build on the work of social anthropologist Tom Harrison's 'Worktown' Mass Observation study from 1938, repeating the original study today. Together these accounts show how perceptions of happiness have changed over the years for the people of Bolton, UK, and reveal major difference between its definition then and now. This unique study is a useful tool in the understanding and study of happiness, offering invaluable insights for scholars and practitioners working in the fields of social psychology, positive psychology, health psychology and wellbeing.Â

Sandie McHugh is an Honorary Research Fellow at the University of Bolton, UK. Â She originally became interested in applied psychology during a career in the civil service and as a member of the Great Britain Women's Target Sports National Squad. Her current research interests centre on positive psychology and happiness.Â