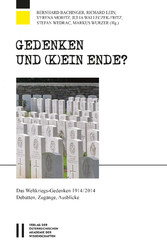 
Since its 'outbreak' in 2014, the Centenary of the First World War was marked by numerous commemorative events, exhibitions, and publications. Soon, it became not only a global phenomenon which left almost no place in society out, but also a new field of scholarly research. In eleven chapters the authors analyze the centenary's various forms of political remembrance as well as how the First World War was recently presented in museums and the media. They describe this war by forms of commemoration and discuss examples from different countries like Slovenia, Bulgaria or Russia, transnational projects, and international cooperation. As the centenary years are not over yet, our authors also present hitherto underrepresented aspects of commemoration, which could be worth of being scholarly explored in the near future. Among our authors are young and advanced scholars. Thus, the volume can be seen as a fundamental contribution to the follow-up of the unique memorial climax of 2014.