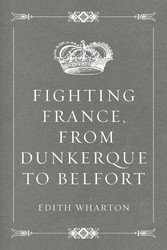 Fighting France, from Dunkerque to Belfort

Fighting France, from Dunkerque to Belfort

In 1921, Edith Wharton became the first woman to win a Pulitzer Prize, earning the award for The Age of Innocence. But Wharton also wrote several other novels, as well as poems and short stories that made her not only famous but popular among her contemporaries. That included her good friend Henry James, and she counted among her acquaintances Teddy Roosevelt and Sinclair Lewis.
In 1915, Wharton wrote this nonfiction war story as World War I was raging across Europe.