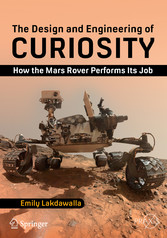 This book describes the most complex machine ever sent to another planet: Curiosity. It is a one-ton robot with two brains, seventeen cameras, six wheels, nuclear power, and a laser beam on its head. No one human understands how all of its systems and instruments work. This essential reference to the Curiosity mission explains the engineering behind every system on the rover, from its rocket-powered jetpack to its radioisotope thermoelectric generator to its fiendishly complex sample handling system. Its lavishly illustrated text explains how all the instruments work -- its cameras, spectrometers, sample-cooking oven, and weather station -- and describes the instruments' abilities and limitations. It tells you how the systems have functioned on Mars, and how scientists and engineers have worked around problems developed on a faraway planet: holey wheels and broken focus lasers. And it explains the grueling mission operations schedule that keeps the rover working day in and day out. Â

Emily Lakdawalla is a planetary scientist who came to the discipline with a background as a boots-on-the-ground field geologist. Although not currently performing research, she has served as an interpreter of planetary science for the public through writing and editing the blog for The Planetary Society for nearly seven years. Lakdawalla is also a Contributing Editor to Sky & Telescope magazine and has written numerous articles for The Planetary Society's Planetary Report.
Lakdawalla has been following the Mars Science Laboratory mission closely since its inception, attending all relevant public meetings, including the last three landing site selection meetings and frequently checking in on its progress from the observation deck over the clean room at JPL.