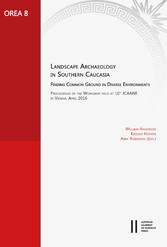 
Recent years have witnessed an explosion of research projects in Southern Caucasia that apply the methodologies and approaches of landscape archaeology. Focused on understanding the interaction between humans and their environments at multiple temporal and geographic scales, these projects have made use of intensive and extensive surveys, remote sensing and GIS-based analysis, very often taking a diachronic view. Landscape Archaeology in Southern Caucasia presents and reflects on projects currently employing these fresh perspectives and techniques in the lands between the Black and Caspian Seas, including and adjacent to the Greater and Lesser Caucasus mountain ranges; this takes in Armenia, Azerbaijan, Georgia, and parts of eastern Turkey and northwestern Iran. Through the centuries, this region has been a vital zone of contact between the Near East, Anatolia and Central Asia, but has also - in large part due to its remarkable and often difficult terrain of mountains, river valleys and plains - maintained a unique and fascinating local trajectory of development. Landscape Archaeology in Southern Caucasia is the product of a workshop held at the 10th ICAANE in Vienna in April 2016, which brought together scholars from around the world engaged in archaeological survey and landscape analysis in Southern Caucasia. The contributions in the volume cover a broad timescale, from the Neolithic through the medieval period and into the modern day, and deal with such themes as the relationship between past and present landscapes, heritage management, the use of remote sensing, the value of integrating historical texts and legacy data into new projects, survey methodologies, and patterns of movement. The volume also includes discussion of avenues for further research, particularly in the fields of information sharing and deeper engagement with legacy data. Finally, Landscape Archaeology in Southern Caucasia reflects and celebrates the spirit of collaboration between scholars within and beyond Southern Caucasia that is both apparent in the diversity of current projects and crucial to achieving the aims of future work in the region.