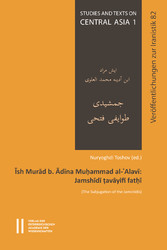 
This is an edition of a Chaghatay-language chronicle written in 1841 in Khiva. The text details a military campaign that the Khorezmian ruler Allah-Quli Khan carried in Khorasan (present-day Northern Afghanistan) and that ended with the resettlement of a local group known as the Jamshidis. It has come to us as a single manuscript, which was discovered a few years ago among the holdings of the Institute of Oriental Studies at the Academy of Sciences of the Republic of Uzbekistan. Written by an eyewitness to the described events, the account contains many facts and details absent from other sources, both Eastern and European. Thus, the text incorporates 37 documents originating from the royal archive in Khiva, which reflect a correspondence between Allah-Quli Khan and various governors in Khorasan. This unique source sheds light on the crafting of historical texts sponsored by a Muslim dynasty on the basis of the material stored in the Khivan chancellery. mehr...