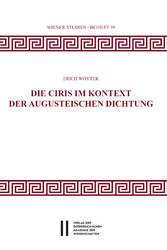 
This study aims at solving a problem that has been puzzling generations of philologists up to the present day. After nearly a century of emotional debate one of its protagonists could not but declare 'the Cirisfrage ... still of course wide open' (R.O.A.M. Lyne 1978). The dates suggested for the neoteric epyllion about Scylla's fatal passion for Minos range from the mid-first century B.C. to the third century A.D., scholars agreeing nowadays almost (!) universally only that this part of the Appendix Vergiliana is not by Virgil. Under these circumstances, a fresh effort to overcome the present deadlock by mustering up more texts of reference and applying new standards of evaluation may not seem inappropriate. Dating the Ciris correctly solely depends on a correct interpretation of the countless striking parallels in the epyllion with works of nearly all the prominent Latin poets, above all of the Augustan era. In order to achieve utmost impartiality of judgement the author employs not only traditional criteria of chronological priority, but also newly established ones: he makes use of a number of phenomena that he recognised as being typical of quotations in pairs of similia whose chronological relationship is uncontested. Moreover, textual similarities to the Ciris