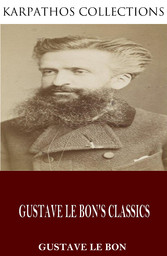 INTRODUCTION: THE REVISION OF HISTORY

The present age is not merely an epoch of discovery; it is also a period of revision of the various elements of knowledge. Having recognised that there are no phenomena of which the first cause is still accessible, science has resumed the examination of her ancient certitudes, and has proved their fragility. To-day she sees her ancient principles vanishing one by one. Mechanics is losing its axioms, and matter, formerly the eternal substratum of the worlds, becomes a simple aggregate of ephemeral forces in transitory condensation.

Despite its conjectural side, by virtue of which it to some extent escapes the severest form of criticism, history has not been free from this universal revision. There is no longer a single one of its phases of which we can say that it is certainly known. What appeared to be definitely acquired is now once more put in question.

Among the events whose study seemed completed was the French Revolution. Analysed by several generations of writers, one might suppose it to be perfectly elucidated. What new thing can be said of it, except in modification of some of its details?

And yet its most positive defenders are beginning to hesitate in their judgments. Ancient evidence proves to be far from impeccable. The faith in dogmas once held sacred is shaken. The latest literature of the Revolution betrays these uncertainties. Having related, men are more and more chary of drawing conclusions.

Not only are the heroes of this great drama discussed without indulgence, but thinkers are asking whether the new dispensation which followed the ancien regime would not have established itself naturally, without violence, in the course of progressive civilisation. The results obtained no longer seem in correspondence either with their immediate cost or with the remoter consequences which the Revolution evoked from the possibilities of history.

Several causes have led to the revision of this tragic period. Time has calmed passions, numerous documents have gradually emerged from the archives, and the historian is learning to interpret them independently.

But it is perhaps modern psychology that has most effectually influenced our ideas, by enabling us more surely to read men and the motives of their conduct.

Among those of its discoveries which are henceforth applicable to history we must mention, above all, a more profound understanding of ancestral influences, the laws which rule the actions of the crowd, data relating to the disaggregation of personality, mental contagion, the unconscious formation of beliefs, and the distinction between the various forms of logic.

To tell the truth, these applications of science, which are utilised in this book, have not been so utilised hitherto. Historians have generally stopped short at the study of documents, and even that study is sufficient to excite the doubts of which I have spoken.

The great events which shape the destinies of peoplesâ revolutions, for example, and the outbreak of religious beliefsâ are sometimes so difficult to explain that one must limit oneself to a mere statement.

From the time of my first historical researches I have been struck by the impenetrable aspect of certain essential phenomena, those relating to the genesis of beliefs especially; I felt convinced that something fundamental was lacking that was essential to their interpretation. Reason having said all it could say, nothing more could be expected of it, and other means must be sought of comprehending what had not been elucidated.

For a long time these important questions remained obscure to me. Extended travel, devoted to the study of the remnants of vanished civilisations, had not done much to throw light upon them.

Reflecting upon it continually, I was forced to recognise that the problem was composed of a series of other problems, which I should have to study separately. This I did for a period of twenty years, presenting the results of my researches in a succession of volumes.

One of the first was devoted to the study of the psychological laws of the evolution of peoples. Having shown that the historic racesâthat is, the races formed by the hazards of historyâfinally acquired psychological characteristics as stable as their anatomical characteristics, I attempted to explain how a people transforms its institutions, its languages, and its arts. I explained in the same work why it was that individual personalities, under the influence of sudden variations of environment, might be entirely disaggregated.

But besides the fixed collectivities formed by the peoples, there are mobile and transitory collectivities known as crowds. Now these crowds or mobs, by the aid of which the great movements of history are accomplished, have characteristics absolutely different from those of the individuals who compose them. What are these characteristics, and how are they evolved? This new problem was examined in The Psychology of the Crowd.

Only after these studies did I begin to perceive certain influences which had escaped me.

But this was not all. Among the most important factors of history one was preponderantâthe factor of beliefs. How are these beliefs born, and are they really rational and voluntary, as was long taught? Are they not rather unconscious and independent of all reason? A difficult question, which I dealt with in my last book, Opinions and Beliefs.

So long as psychology regards beliefs as voluntary and rational they will remain inexplicable. Having proved that they are usually irrational and always involuntary, I was able to propound the solution of this important problem; how it was that beliefs which no reason could justify were admitted without difficulty by the most enlightened spirits of all ages.

The solution of the historical difficulties which had so long been sought was thenceforth obvious. I arrived at the conclusion that beside the rational logic which conditions thought, and was formerly regarded as our sole guide, there exist very different forms of logic: affective logic, collective logic, and mystic logic, which usually overrule the reason and engender the generative impulses of our conduct.

This fact well established, it seemed to me evident that if a great number of historical events are often uncomprehended, it is because we seek to interpret them in the light of a logic which in reality has very little influence upon their genesis.

All these researches, which are here summed up in a few lines, demanded long years for their accomplishment. Despairing of completing them, I abandoned them more than once to return to those labours of the laboratory in which one is always sure of skirting the truth and of acquiring fragments at least of certitude.

But while it is very interesting to explore the world of material phenomena, it is still more so to decipher men, for which reason I have always been led back to psychology.

Certain principles deduced from my researches appearing likely to prove fruitful, I resolved to apply them to the study of concrete instances, and was thus led to deal with the Psychology of Revolutionsânotably that of the French Revolution.

Proceeding in the analysis of our great Revolution, the greater part of the opinions determined by the reading of books deserted me one by one, although I had considered them unshakable.

To explain this period we must consider it as a whole, as many historians have done. It is composed of phenomena simultaneous but independent of one another.

Each of its phases reveals events engendered by psychological laws working with the regularity of clockwork. The actors in this great drama seem to move like the characters of a previously determined drama. Each says what he must say, acts as he is bound to act.

To be sure, the actors in the revolutionary drama differed from those of a written drama in that they had not studied their parts, but these were dictated by invisible forces.

Precisely because they were subjected to the inevitable progression of logics incomprehensible to them we see them as greatly astonished by the events of which they were the heroes as are we ourselves. Never did they suspect the invisible powers which forced them to act. They were the masters neither of their fury nor their weakness. They spoke in the name of reason, pretending to be guided by reason, but in reality it was by no means reason that impelled them.

``The decisions for which we are so greatly reproached,ââ wrote Billaud-Varenne, ``were more often than otherwise not intended or desired by us two days or even one day beforehand: the crisis alone evoked them.ââ

Not that we must consider the events of the Revolution as dominated by an imperious fatality. The readers of our works will know that we recognise in the man of superior qualities the role of averting fatalities. But he can dissociate himself only from a few of such, and is often powerless before the sequence of events which even at their origin could scarcely be ruled. The scientist knows how to destroy the microbe before it has time to act, but he knows himself powerless to prevent the evolution of the resulting malady.

When any question gives rise to violently contradictory opinions we may be sure that it belongs to the province of beliefs and not to that of knowledge.

We have shown in a preceding work that belief, of unconscious origin and independent of all reason, can never be influenced by reason.

The Revolution, the work of believers, has seldom been judged by any but...