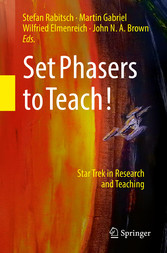 Set Phasers to Teach! - Star Trek in Research and Teaching

Set Phasers to Teach! - Star Trek in Research and Teaching

For 50 years, Star Trek has been an inspiration to its fans around the world, helping them to dream of a better future. This inspiration has entered our culture and helped to shape much of the technology of the early 21st Century.
The contributors to this volume are researchers and teachers in a wide variety of disciplines; from Astrophysics to Ethnology, from English and History to Medicine and Video Games, and from American Studies to the study of Collective Computing Systems. What the authors have in common is that some version of Star Trek has inspired them, not only in their dreams of what may be, but in the ways in which they work - and teach others to work - here in the real world.Â
Introduced with references to Star Trek films and television shows, and illustrated with original cartoons, each of the 15 chapters included in this volume provides insights into research and teaching in this range of academic fields.


Stefan 'Steve' Rabitsch is fixed-term assistant professor in American Studies at the University of Graz and teaches courses in American cultural history at the University of Klagenfurt. A self-declared 'Academic Trekkie', he is going to publish his first monograph, Star Trek's Secret British History, with McFarland in 2018. He is co-editor of Fantastic Cities: American Urban Spaces in Science Fiction, Fantasy, and Horror (UP Mississippi, 2018). He is also a founding editorial board member of JAAAS: Journal of the Austrian Association of American Studies. In his endeavors he focuses on American Cultural Studies and Science Fiction Studies across media.
Â
Martin Gabriel studied history at the University of Klagenfurt (Austria). He has been a member of the department of history since 2008, and a lecturer in modern history since 2012. His publications and university teaching activities focus on the history of empires (primarily Austria-Hungary, Britain, Spain, and the US), colonial warfare, and social as well as cultural historyÂ in the period from c. 1600 to 1890.Â


Wilfried Elmenreich is professor of Smart Grids at the Institute of Networked and Embedded Systems at the Alpen-Adria-UniversitÃ¤t Klagenfurt, Austria. He studied computer science at the Vienna University of Technology, where he received his doctoral degree in 2002 and his venia docendi in the field of computer engineering in 2008. He is editor and author of several books and published over 150 papers in the field of networked and embedded systems. Elmenreich is senate member of Alpen-Adria-UniversitÃ¤t Klagenfurt, Senior Member of IEEE and counselor of the Klagenfurt's IEEE student branch. His ErdÃ¶s Number is 3.


John N.A. Brown has published two previous books with Springer and has lectured around the world. He is an inventor, designer, and researcher specializing in Human Factors and the User Experience. His approach to Human-Computer Interaction is based on applying mindful and informed iteration to shape tools that suit human abilities and limitations. After all, we don't have time to wait for the cross-generational processes of evolution and adaption that naturally make tool use both effective and comfortable. Dr. Brown calls this approach Anthropology-Based Computing.