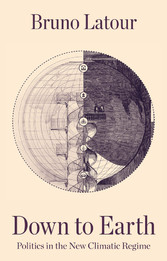 Down to Earth - Politics in the New Climatic Regime

Down to Earth - Politics in the New Climatic Regime

The present ecological mutation has organized the whole political landscape for the last thirty years. This could explain the deadly cocktail of exploding inequalities, massive deregulation, and conversion of the dream of globalization into a nightmare for most people.Â
What holds these three phenomena together is the conviction, shared by some powerful people, that the ecological threat is real and that the only way for them to survive is to abandon any pretense at sharing a common future with the rest of the world. Hence their flight offshore and their massive investment in climate change denial.
The Left has been slow to turn its attention to this new situation. It is still organized along an axis that goes from investment in local values to the hope of globalization and just at the time when, everywhere, people dissatisfied with the ideal of modernity are turning back to the protection of national or even ethnic borders.
This is why it is urgent to shift sideways and to define politics as what leads toward the Earth and not toward the global or the national. Belonging to a territory is the phenomenon most in need of rethinking and careful redescription; learning new ways to inhabit the Earth is our biggest challenge. Bringing us down to earth is the task of politics today.

Bruno Latour is one of the world's leading sociologists and anthropologists. He taught at the Ãcole des Mines in Paris from 1982 to 2006 and he is now Professor and Vice-President for Research at Institut d'Ã©tudes politiques (Sciences Po). His many books include Laboratory Life, We Have Never Been Modern, Reassembling the Social and Facing Gaia.