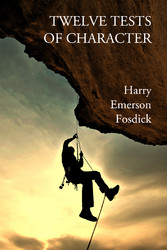 A recent ride upon a Fifth Avenue bus threatened to waste time. The talk of two women, however, whose conversation was too plainly audible to be escaped, made it well worth while. They were bosom friends, and in an hourâs tÃªte-Ã -tÃªte they gave a comprehensive rÃ©sumÃ© of their characters.

They loved to play bridge, and they played it, apparently, a good deal of the time. They were gambling at it. To be sure, one of them had had some trouble with her husband, who, having been brought up a Presbyterian, had scruples about gambling. "But," she had said to him, "you see that we must give up the game if we do not gamble." So he had come over just recently. They were all gambling now and were happy. They loved the theater, especially musical comedies. They loved to dance and evidently, when they were not playing bridge, dancing was their chief diversion. They loved their automobile trips, and as for dress, how shall a mere man report their conversation about that? One listened to see if any other interest in life would be revealed, but this was all. Their talk had struck bottom.

These women live in one of the most needy and critical generations in history, when a shaken civilization is striving desperately to get on its feet again, when there are great enterprises to serve, great books to read, great thoughts to think; and yet their lives, like a childâs doll, are stuffed with sawdust. They represent in an extreme form one of the commonest failures in characterâthe crowding out of things that really matter by things that do not matter much. They are absorbingly busy with trivialities. They have missed the primary duty and privilege of life putting first things first.

The basic facts about us which make such promiscuous preoccupation ruinous is that our lifeâs time and our lifeâs energy are limited. We are like street cars: we can hold our quota and no more; when all seats are taken, the standing room absorbed, and the "Car Full" sign put up in front, whoever hails us next, though he be the most prominent citizen in the community, must be passed by.

It never was so easy to fail in this particular way as it is today. There may have been times when life was sluggish and folk could drift listlessly through apathetic years. The Bible tells the story of Methuselahâs living over nine centuries, but, so far as the record shows, he never did anything or thought anything to make such longevity worth while. If ever life could be dragged out through such dull continuance, that time has gone. Today the currents of life are swift and stimulating, the demands of life absorbing. There are more things to do than we ever shall get done; there are more books to read than we ever can look at; there are more avenues to enjoyment than we ever shall find time to travel. Life appeals to us from innumerable directions, crying, "Attend to me here!" In consequence, we are continually tempted to dabble. We litter up our lives with indiscriminate preoccupation. We let first come be first served, forgetting that the finest things do not crowd. We let the loudest voices fill our ears, forgetting that asses bray, but gentlemen speak low. Multitudes of people are living not bad but frittered livesâsplit, scattered, uncoordinated. They are like pictures into which a would-be artist has put, in messy disarray, everything that he has chanced to see; like music into which has been hurled, helter-skelter, every vagrant melody that strayed into the composerâs mind.

Preoccupation is the most common form of failure.

Consider, for example, the effect of preoccupation on our reading. Some time ago an airship collapsed above Chicago and dumped itself ruinously down upon a public building. People woke up at that, to see that new inventions like airplanes require special regulation. Now, the printing press is a comparatively new invention. Five hundred years ago there was no such thing. And while it is important that aircraft should not be allowed to empty themselves into our households, it is just as important to consider what the printing press is emptying into our heads.

An entirely new set of problems has arisen since the printing press arrived and reading became one of the dominant influences of human life. When one considers how reading seeps in through all the cracks and crannies of our days, what power there is in books to determine our views of life, and how cheaply these possibilities lie at every manâs hand, it is plain that the quality of a manâs reading is one of his foremost responsibilities.

It is plain, too, that while a few people deliberately read perversive books, most of us miss the best books, not because we choose the bad but because we litter up our minds with casual trash. We stop to pass the time of day with any printed vagabond who plucks at our sleeve. We have forgotten Ruskinâs exclamation: "Do you know, if you read this, that you cannot read that?"

It is no longer necessary that anybody should plead with us to read. We read enough. "What do you read, my lord?" says Polonius, and Hamlet answers, "Words, words, words." That is a fair description of a great deal of reading in a world which someone has described as "a blur of printed paper."

But how many put first books first? How many would think of saying with Mrs. Browning: "No man can be called friendless when he has God and the companionship of good books"?

To be sure, there are minor kinds of reading of which we all must do more or less. We read for efficiency in daily work. Modern business in every realm, from domestic science to international commerce, has been broken up into an indefinite number of specialties, and books convey to us the results of other menâs labors. Any man, to be an adept must read the specialists. But if a man uses books only so, as Pharaoh might use his slaves to build the pyramid of his success and renown, he does not know what real reading means.

Moreover, we read to keep up with the timesâan endless stream of papers, magazines, and books, reflecting every changing situation in this fluid world, until we are fairly dizzy with the flood of them. And we read the books that are talked about just because they are talked about. Of all social compulsions what is more urgent than the oft-repeated question: "Have you readâ? " That club flogs us to our reading. "What!" says our friend, "you have not read so and so?" Whereupon we fly to the nearest bookstore and against the necessity of conversation at the next dinner we buy a best-seller.

Yet, so continuously reading, we read everything except the books that we should read first of all. The great books habitually are crowded out. The little books that are menially useful to us, our slaves, running errands for us to further our convenience or success, or to dress us in the tinsel of a ready conversationâwe read those. But the books that are not slaves, but masters, at whose feet the wise sit to be taught and illumined and inspiredâthey are crowded out. We should hardly think of saying, as Charles Lamb did, that we should like to say grace over our books; or with Charles Kingsley, "Except a living man, there is nothing more wonderful than a book."

Nevertheless, the great books are waiting for us all. If the worldâs poets and seers, prophets and apostles were alive, we could hardly meet them one by one, much less talk with them. But in a book they will come to each of us as though there were no one else in all the world for them to call upon. Though we are so poor that we must have them in paper covers, they will be all there. Though we are so dull that we cannot understand at first, they will repeat the message to us again and again. Though we are so foolish as to forget, they will be there on the morrow to tell it to us once more with tireless patience. Great books are the perfect democrats. The shame of many of us is that, with such books waiting to be read, we stop to barter gossip with every corner loafer on our way. Any vagrant straggler down the literary street can waste our attention and our time. And because time and attention are limited, having read this, we cannot read that.

Reading is but one illustration of the way in which habitually the best in life is lost to us by being crowded out. Dean Briggs, of Harvard, describes a company of American young people whom he saw in Rome. They were on their first visit to the Eternal City. Morning after morning they arose with the opportunity of a lifetime awaiting them. The Forum, the Coliseum, Saint Peterâs, the whole city, fabulously rich in historical association, was at their disposal. And every day they settled down in the hotel for a long morning at bridge. Cries Dean Briggs: "What business had such people in Rome? What business had they anywhere?"

So far as our amusements are concerned, this loss of the best, through the preposterous cramming of our lives with wastage, is the more common because the old Puritanical attitude against popular recreations has gone to pieces. Fortunately we can only with difficulty imagine ourselves back in the time when drama had to be presented, if it was to be presented at all, under the guise of a free extra, interspersed between the musical numbers of a concert. In Portland, Maine, on July 4, 1820, the following advertisement appeared in the public press:

"The public are respectfully informed that there will be a Concert of vocal and instrumental music this evening. Between the parts of the Concert there will be performed (gratis) a celebrated Play in three acts called The Point of Honor. To conclude with Shakespeareâs admired farce in three acts (gratis) called Katherine and Petruchio."

That day happily has gone. Concerning popular recreations which...