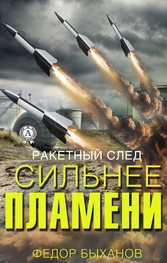 Not everything is smooth in the industrial and scientific center, lost in the open spaces of Siberia, where the foundation of the state's defense shield is being created. In pursuit of the currency promised by foreigners for the elimination of special-range missiles, the leadership of the chemical plant was involved in the implementation of this part of its international agreement. Industrialists did not even bother to inform the public that there would be clouds of toxic smoke rising above the city. And against the similar disposal of rocket fuel, an honest mayor spoke, the company's management did everything possible to re-elect it. Under the new mayor, they went to new violations, which turned into a terrible catastrophe, in the center of which was a local journalist who was forced to flee, first from fire and then from the hands of an assassin. All this became the plot outline of the fiction novel 'Stronger than the Flame' of Fyodor Bykhanov, with which the author opens a cycle of fiction works entitled 'Rocket Trail'. The very e-book of Fedor Bykhanov 'Stronger than the flame' can be read and downloaded in the format of epub, fb2, pdf, as well as many other works of this Siberian author. Including: a collection of fantastic stories and stories 'The Alien', the novels 'The Mystery of the Mountain Lake', 'Sledak from Korobeiniki' and 'The Wind of Hope', a fantastic dilogy 'The Unfinished Consequence' from the novels 'Watches from the past' and 'The Runaways'. And also to the attention of a wide readership are the collections of judicial essays 'Without a statute of limitations' and 'Forwarder's bag', included in the cycle of electronic books called 'Criminal Province'.