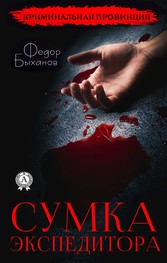 The collection of court essays 'Freight forwarder's bag' continues the successful cycle of Fyodor Bykhanov's works 'Criminal Province', begun, already gained wide popularity among fans of modern detective literature, a collection of documentary works from the courtroom called 'Without a statute of limitations.' Taken together, the history of the commission and disclosure of serious and not quite ordinary crimes, based on real events, but in artistic form reproduces the picture of various illegal incidents, against which the ordinary life of the Russian hinterland proceeds. After all, the basis of all, without exception, essays based on real events. For ethical reasons, only the names of the actors have been changed, many of whom have departed, a criminal punishment assigned to them and are trying to live honestly. The publication is intended for a wide range of readers and contributes to the prevention of offenses by displaying contemporary reality, in which, unfortunately, various criminal manifestations have not yet been eradicated. The e-book of Fedor Bykhanov 'Forwarder's Bag' can be read and downloaded in the epub, fb2, pdf format, as well as many other works of this Siberian author. Including such as the collection of fantastic stories and stories 'Alien', science fiction novels The Mystery of Mountain Lake, Stronger Flames, Sledak from Korobeinik and Wind of Hope, a fantastic dilogy 'Unfinished effect' from the novels 'Watches from of the past 'and' The Runaways. ' As well as a collection of court essays 'Without a statute of limitations', which opened the book cycle 'Criminal Province', continued by a new collection of court essays 'Baggage Forwarder'.