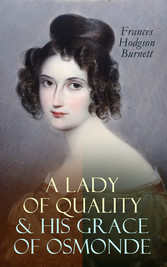 A Lady of Quality & His Grace of Osmonde - Victorian Romance Novels

A Lady of Quality & His Grace of Osmonde - Victorian Romance Novels

Chapter II.
In which Sir Jeoffry encounters his offspring

In a remote wing of the house, in barren, ill-kept rooms, the poor infants of the dead lady had struggled through their brief lives, and given them up, one after the other. Sir Jeoffry had not wished to see them, nor had he done so, but upon the rarest occasions, and then nearly always by some untoward accident. The six who had died, even their mother had scarcely wept for; her weeping had been that they should have been fated to come into the world, and when they went out of it she knew she need not mourn their going as untimely. The two who had not perished, she had regarded sadly day by day, seeing they had no beauty and that their faces promised none. Naught but great beauty would have excused their existence in their fatherâs eyes, as beauty might have helped them to good matches which would have rid him of them. But âtwas the sad ill fortune of the children Anne and Barbara to have been treated by Nature in a way but niggardly. They were pale young misses, with insignificant faces and snub noses, resembling an aunt who died a spinster, as they themselves seemed most likely to. Sir Jeoffry could not bear the sight of them, and they fled at the sound of his footsteps, if it so happened that by chance they heard it, huddling together in corners, and slinking behind doors or anything big enough to hide them. They had no playthings and no companions and no pleasures but such as the innocent invention of childhood contrives for itself.

After their motherâs death a youth desolate and strange indeed lay before them. A spinster who was a poor relation was the only person of respectable breeding who ever came near them. To save herself from genteel starvation, she had offered herself for the place of governess to them, though she was fitted for the position neither by education nor character. Mistress Margery Wimpole was a poor, dull creature, having no wilful harm in her, but endowed with neither dignity nor wit. She lived in fear of Sir Jeoffry, and in fear of the servants, who knew full well that she was an humble dependant, and treated her as one. She hid away with her pupils in the bare school-room in the west wing, and taught them to spell and write and work samplers. She herself knew no more.

The child who had cost her mother her life had no happier prospect than her sisters. Her father felt her more an intruder than they had been, he being of the mind that to house and feed and clothe, howsoever poorly, these three burdens on him was a drain scarcely to be borne. His wife had been a toast and not a fortune, and his estate not being great, he possessed no more than his drinking, roystering, and gambling made full demands upon.

The child was baptized Clorinda, and bred, so to speak, from her first hour, in the garret and the servantsâ hall. Once only did her father behold her during her infancy, which event was a mere accident, as he had expressed no wish to see her, and only came upon her in the nurseâs arms some weeks after her motherâs death. âTwas quite by chance. The woman, who was young and buxom, had begun an intrigue with a groom, and having a mind to see him, was crossing the stable-yard, carrying her charge with her, when Sir Jeoffry came by to visit a horse.

The woman came plump upon him, entering a stable as he came out of it; she gave a frightened start, and almost let the child drop, at which it set up a strong, shrill cry, and thus Sir Jeoffry saw it, and seeing it, was thrown at once into a passion which expressed itself after the manner of all his emotion, and left the nurse quaking with fear.

âThunder and damnation!â he exclaimed, as he strode away after the encounter; ââtis the ugliest yet. A yellow-faced girl brat, with eyes like an owlâs in an ivy-bush, and with a voice like a very peacocks. Another mawking, plain slut that no man will take off my hands.â

He did not see her again for six years. But little wit was needed to learn that âtwas best to keep her out of his sight, as her sisters were kept, and this was done without difficulty, as he avoided the wing of the house where the children lived, as if it were stricken with the plague.

But the child Clorinda, it seemed, was of lustier stock than her older sisters, and this those about her soon found out to their grievous disturbance. When Mother Posset had drawn her from under her dead motherâs body she had not left shrieking for an hour, but had kept up her fierce cries until the roof rang with them, and the old woman had jogged her about and beat her back in the hopes of stifling her, until she was exhausted and dismayed. For the child would not be stilled, and seemed to have such strength and persistence in her as surely infant never showed before.

âNever saw I such a brat among all I have brought into the world,â old Posset quavered. âShe hath the voice of a six-months boy. It cracks my very ears. Hush thee, then, thou little wild cat.â

This was but the beginning. From the first she grew apace, and in a few months was a bouncing infant, with a strong back, and a power to make herself heard such as had not before appeared in the family. When she desired a thing, she yelled and roared with such a vigour as left no peace for any creature about her until she was humoured, and this being the case, rather than have their conversation and love-making put a stop to, the servants gave her her way. In this they but followed the example of their betters, of whom we know that it is not to the most virtuous they submit or to the most learned, but to those who, being crossed, can conduct themselves in a manner so disagreeable, shrewish or violent, that life is a burden until they have their will. This the child Clorinda had the infant wit to discover early, and having once discovered it, she never ceased to take advantage of her knowledge. Having found in the days when her one desire was pap, that she had but to roar lustily enough to find it beside her in her porringer, she tried the game upon all other occasions. When she had reached but a twelvemonth, she stood stoutly upon her little feet, and beat her sisters to gain their playthings, and her nurse for wanting to change her smock. She was so easily thrown into furies, and so raged and stamped in her baby way that she was a sight to behold, and the men-servants found amusement in badgering her. To set Mistress Clorinda in their midst on a winterâs night when they were dull, and to torment her until her little face grew scarlet with the blood which flew up into it, and she ran from one to the other beating them and screaming like a young spitfire, was among them a favourite entertainment.

âIfackens!â said the butler one night, âbut she is as like Sir Jeoffry in her temper as one pea is like another. Ay, but she grows blood red just as he does, and curses in her little way as he does in manâs words among his hounds in their kennel.â

âAnd she will be of his build, too,â said the housekeeper. âWhat mishap changed her to a maid instead of a boy, I know not. She would have made a strapping heir. She has the thigh and shoulders of a handsome man-child at this hour, and she is not three years old.â

âSir Jeoffry missed his mark when he called her an ugly brat,â said the woman who had nursed her. âShe will be a handsome womanâthough large in build, it may be. She will be a brown beauty, but she will have a colour in her cheeks and lips like the red of Christmas holly, and her owlâs eyes are as black as sloes, and have fringes on them like the curtains of a window. See how her hair grows thick on her little head, and how it curls in great rings. My lady, her poor mother, was once a beauty, but she was no such beauty as this one will be, for she has her fatherâs long limbs and fine shoulders, and the will to make every man look her way.â

It was true that she had no resemblance to her plain sisters, and bore no likeness to them in character. The two elder children, Anne and Barbara, were too meek-spirited to be troublesome; but during Clorindaâs infancy Mistress Margery Wimpole watched her rapid growth with fear and qualms. She dare not reprove the servants who were ruining her by their treatment, and whose manners were forming her own. Sir Jeoffryâs servants were no more moral than their master, and being brought up as she was among them, their young mistress became strangely familiar with many sights and sounds it is not the fortune of most young misses of breeding to see and hear. The cooks and kitchen-wenches were flighty with the grooms and men-servants, and little Mistress Clorinda, having a passion for horses and dogs, spent many an hour in the stables with the women who, for reasons of their own, were pleased enough to take her there as an excuse for seeking amusement for themselves. She played in the kennels and among the horsesâ heels, and learned to use oaths as roundly as any Giles or Tom whose work was to wield the curry comb. It was indeed a curious thing to hear her red baby mouth pour forth curses and unseemly words as she would at any one who crossed her. Her temper and hot-headedness carried all before them, and the grooms and stable-boys found great sport in the language my young lady used in her innocent furies. But balk her in a whim, and she would pour forth the eloquence of a fish-wife or a lady of easy virtue in a pot-house quarrel. There was no human creature near her who had mind or heart...