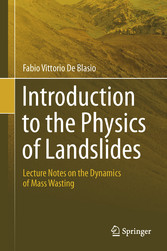 Landslides represent one of the most destructive natural catastrophes. They can reach extremely long distances and velocities, and are capable of wiping out human communities and settlements. Yet landslides have a creative facet as they contribute to the modification of the landscape. They are the consequence of the gravity pull jointly with the tectonic disturbance of our living planet.
Landslides are most often studied within a geotechnical and geomorphological perspective. Engineering calculations are traditionally applied to the stability of terrains. In this book, landslides are viewed as a physical phenomenon. A physical understanding of landslides is a basis for modeling and mitigation and for understanding their flow behavior and dynamics. We still know relatively little about many aspects of landslide physics. It is only recently that the field of landslide dynamics is approaching a more mature stage. This is testified by the release of modelling tools for the simulation of landslides and debris flows. In this book the emphasis is placed on the problems at the frontier of landslide research. Each chapter is self-consistent, with questions and arguments introduced from the beginning.