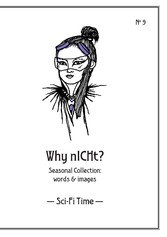 
'Sci-fi time' contains poems, prose, and experimental hooha in English, German and French. The contributors deal with time and space, utopias and dystopias, cybernetic and post-human, the intergalactic and interpersonal. Why nICHt? is a semi-annual literary magazine publishing poetry, short prose and translations. The languages of the publications are English, German, French and Russian (the latter only as a source language for translations). Alongside the literary works the magazine publishes graphic representation of language. These are important for the reception of the magazine in its entirety, as they are attempts to translate the poems into the visual realm. Why nICHt? encourages submissions from all categories of contributors, including those whose work has not been published yet.

Irina Brantner is a lecturer at the Department of European and Comparative Literature and Languages at the University of Vienna. Her expertise covers European, Scottish and Russian literature, translation and reception. She founded Why nICHt? in 2014 to publish new and established authors.