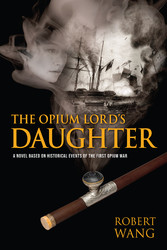 The Opium Lord's Daughter is a gripping historical drama told from dual perspectives-Chinese and English-about the First Opium War, a tragic and history-altering conflict that occurred during the 19th century. The eponymous protagonist's coming of age story is marked by shady dealings, cultural misunderstandings, and a complicated love triangle. The Opium Lord's Daughter is an expedition through the destruction of a culture, underscoring the hold and havoc drug empires perpetually exert. It is a tale spanning two continents, vividly painted through the perspectives of several colorful main characters, whose stories illuminate both the intricacies and the sweep of this critical period in history. A must-read for history buffs and fans of tales well-told!