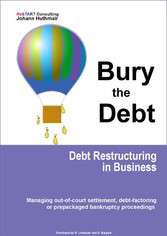 Concluding remarks with prospects The corporate management is a highly complex affair. Many books have been written about the topic. Those modes of behaviour that lead to a heightened danger of financial attack, and their course of development, have been highlighted and explained here. Only a few entrepreneurs are able to act objectively and dispassionately under the pressure of the threat, as the insolvency law asserts. By far the greatest percentage of entrepreneurs who find themselves in the crisis stage (estimated 90%) behave like the rabbit faced by the snake.

Nobody is completely free in this world. We are only free to make decisions within the framework of inherent laws. This applies to the universal law of life, to the social order, judicial laws and also to technical-scientific laws. Everybody is grounded in legalities imposed upon them. The entrepreneur should recognise these inherent priorities of laws, draw conclusions and learn from problems. The key question for businessmen in turbulent time is: how to get the balance between body-fittnes, head-priorities and heart-spirit.

Investment recommendations as viewed from a tax point of view often turn out to be a retrogressive step. An incorrect evaluation of the tax implications in the final analysis has the effect of increasing the relevant risk factors, just like fatty foods would increase the risk of a heart attack. The question of increasingly involving the economic trustees in the responsibility and liability for preparing reports and balance-sheets is at present being debated. The hope exists that this will help companies to make the most of timeous recovery opportunities, resulting in increased protection for creditors.

Particular subjects will also be of more interest to some readers than others, depending on individual involvement. Many readers will miss some subject areas or rate them as dealt with too briefly, others will criticise one or other chapter as too detailed. With this book I would like to create stimuli, whereby entrepreneurs, their families and the business partners associated with them, can recognise patterns for success and bottlenecks in good time and which will result in learning.

The formation and application of reliable own capital at the right time should be a challenge for all entrepreneurs. However, every entrepreneur has to take charge of this situation himself, as excessive attention by the state concerning the legal regulations appears less promising, because of the well-known plight of the budget. Too many entrepreneurs put too much emphasis on the growth of the company and on expansion, and thus place themselves in a position of great dependency on grantors of external capital. Others cling too much to the past, and consume their own capital reserves through consecutive losses. A more circumspect, flexible entrepreneur who thinks and orientates himself long-term, creates for himself the prerequisites for risk limitation, and reliable formation of own capital. The financial attack could be avoided in most cases, if appropriate measures were introduced at the right time.

This book-series is written from experience (praxis) obtained with the entrepreneurial profession. It must be seen as only a small extract from the whole entrepreneurial reality, and so it is also logical that the reader would miss certain factors applicable to himself, while others will find it too detailed or even inappropriate. If it has been successful in providing an impetus for individual, more thorough research on the topic of avoiding financial attack, then the work has been worthwhile.