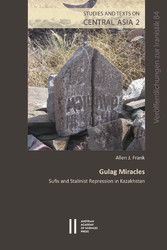 The book 'Gulag Miracles: Sufis and Stalinist Repression in Kazakhstan', represents the first detailed study of Muslim religious responses to totalitarian repression during the first half of the 20th century, and is therefore of interest to specialists in Islamic Studies, Religious Studies, Russian and Soviet History, Central Asian and Turkic Studies, and Sufi Studies. Based on Kazakh-language hagiographies produced by Sufi communities, the monograph examines how these communities interpreted and explained the experience of repression (anti-religious policies targeting Sufis, collectivization, famine, and mass arrests), and how these communities adjusted to Soviet life after the Second World War. At the center of the study are a series of miracle stories, set in the Gulag, recounting the experiences of saints and other prominent members of these communities with Stalinist repression. These stories, rich in symbolic meaning, circulated among these communities in the Soviet era, and contain political critiques of the Stalin era, based on Islamic and Sufi ethics. These hagiographies, published in the late 20th and early 21st centuries, clearly reveal the continuity of Sufi concepts in Kazakh communities from the medieval period, through to independence, bringing into question the degree to which the Soviet era represented a rupture in the religious lives of Muslim communities. The book also considers the role of Sufi communities in Kazakh kinship structures, and their manifestation during the Soviet era. In this context, it reevaluates much that has been written about 'Soviet Islam', questioning the justification for separating the Soviet Union and its Muslim communities from the rest of the 'Muslim World'. The hagiographies demonstrate that while Sufi communities underwent a degree of Sovietization, as reflected in their stories, this Sovietization was accomplished, ironically, by a parallel 'Islamization' of various aspects of the Soviet experience.