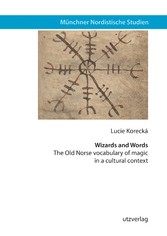 This work presents an outline of the Old Norse vocabulary associated with magic and its practicioners. The research is focused on the individual words' evaluative aspect and on their function within the texts, as well as on the narrative roles of magic as a literary motif and as a cultural concept. The literary motif of magic plays a significant role as a narrative device that enables the construction of multiple layers of meaning in the texts. The cultural concept of magic contributes to the conceptualization of various social and psychological aspects, such as the transformations of political power, gender roles, the transgression of norms, irrational impulses, and diverse forms of otherness.