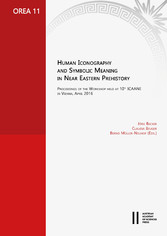 Human Iconography and Symbolic Meaning in Near Eastern Prehistory - Proceedings of the Workshop held at 10th ICAANE in Vienna, April 2016


Human iconography in Near Eastern prehistory has so far only examined specific themes. Iconographic research has mainly focused on aspects of fertility cults and images of the divine, both of which are strongly correlated with the beginning of sedentism in the Early Neolithic. Fieldwork over the last 30 years in South-west Asia has significantly expanded the spectrum of prehistoric anthropomorphic representations. This not only requires a re-evaluation of hitherto standard interpretation models, but also new approaches towards research on themes such as self-perception and self-expression of the human. The contributions in this volume will present a new and comprehensive understanding of prehistoric anthropomorphic iconography which will supplement the conventional thematic canon that is usually applied to the analyses of anthropomorphic representations. The contributions include detailed considerations of contexts containing anthropogenic images, burial practices, and anthropological data regarding health and nutrition. The chronological focus of the volume is the period from the late Epipalaeolithic (Natufian) to the Chalcolithic (c. 14,900 to 5700 cal.BP) covering the 'fertile crescent' region of South-west Asia. This period and region provide the broad context of the development of agriculture and animal husbandry as well as further essential foundations for social coexistence, all of which profoundly influence our modern society. The chapters show that the human iconography provides evidence for social hierarchies and complex gender relations from prehistory on. Further, they show early tendencies towards a canonisation of the principles of presentation in gestures. Magic-religious practices become visible, and the basic question regarding whether human beings or supernatural creatures are depicted is discussed in several contributions, although the meaning of their symbolic contents remains to be deciphered by future research.