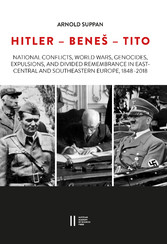 In the spring of 1945, FÃ¼hrer and Reich Chancellor Adolf Hitler, President Edvard Bene?, and Marshal Josip Broz Tito stood as examples of the complete rupture between the Germans and Austrians on the one hand, and the Czechs, Slovaks, Slovenes, Croats, Serbs, and Bosniaks on the other. The total break that occurred in World War II with war crimes, crimes against humanity, and even genocides (particularly against the Jews and 'Gypsies') had a long pre-history, beginning with violent nationalist clashes in the Habsburg Monarchy during the revolutions of 1848/49. Therefore, this monograph - based on a broad range of international primary and secondary sources - explores the development of the political, legal, economic, social, and cultural 'communities of conflict' within Austria-Hungary, especially in the Bohemian and South Slavic countries, the making of the Paris Peace Treaties in 1919/20 by violating President Wilson's principle of self-determination, particularly in drawing new borders and creating new economic units, and the perpetuated ethnic-national conflicts between Czechs and Germans, Slovaks and Magyars, Slovenes and Germans, Croats and Serbs as well as Serbs and Germans in the successor states, deepening the differences between the nations of East-Central Europe. Although many kings, presidents, chancellors, ministers, governors, diplomats, business tycoons, generals, Nazi-Gauleiter, higher SS and police leaders, and Communist functionaries have appeared as historical actors in the 170 years of East-Central and Southeastern European history, Hitler, Bene?, and Tito remain especially present in historical memory at the beginning of the twenty-first century.