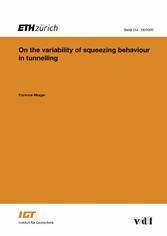 On the variability of squeezing behaviour in tunnelling

On the variability of squeezing behaviour in tunnelling

The magnitude of squeezing deformations in tunnelling often varies over short distances, even if there is no obvious change in the construction method, in the depth of cover, in the lithology or rock structure. As long as the reasons for the variability are not known, the tunnelling-induced convergences cannot be predicted with sufficient reliability. Reliable predictions, however, are important for determining the temporary support or the excavation diameter. Otherwise, large-scale tunnel repairs may be necessary, which can cause delay and additional costs due to remedial actions as well as due to the enforced interruption of other operations in progress at the same time. The analysis of different case studies concerning the AlpTransit project shows that the squeezing variability can be traced back to the heterogeneities in the rock mass at different scales as well as the variation of the orientation of the planes of anisotropy (bedding or schistosity) to the tunnel axis. In order to improve safety and economy of tunnel construction in squeezing ground, the influence of these factors on the convergences was determined quantitatively (by means of analytical solutions or numerical modelling), so that they can be used as indicators during construction for the timely identification and prediction of the squeezing behaviour. Particular attention was paid on factors, whose variation, even if small, may affect the convergences sensitively . Based on these quantitative investigations, design aids were developed, which should help the project engineer to estimate and better understand the variability of the squeezing intensity. The squeezing variability also concerns TBM tunnelling: In contrast to conventional tunnelling, shielded TBMs are particularly vulnerable to squeezing due to the very limited space available. Therefore, in order to better deal with the squeezing variability in TBM tunnelling, different (stiff as well as deformable) lining options were discussed.