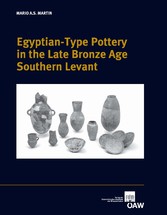 This volume presents a group of Late Bronze Age (ca. 1500-1130 BCE; 18th-20th Egyptian Dynasties) ceramics in the southern Levant that can be linked to the Egyptian pottery tradition (imported and locally produced). It should be of interest to scholars dealing with the Late Bronze Age in the Eastern Mediterranean in general, and with the Egyptian impact in the southern Levant in particular. The volume is divided into four main parts: Part I provides the reader with a typology of the relevant Egyptian forms. Part II explores the technological traits of the material under review, including fabric analyses, as well as formation techniques. Part III is a site by site presentation of the Egyptian assemblages to offer a broad canvas of the phenomenon under review (mainly Beth-Shean, Megiddo, Tell es-Sa'idiyeh, Tel Dor, Tel Aphek, Tel Mor, Ashkelon, Tell el-'Ajjul, Deir el-Balah, Lachish, Tel Sera' and Tell el-Far'ah [South]). Part IV presents a concluding discussion. Among other issues it collates a combined chronological framework, an analysis of the repertoire and function of the Egyptian assemblages and a reflection on the role of (locally-made) Egyptian-style pottery as ethnic marker. The volume closes with 68 plates, showing drawings of the vessels discussed throughout the study. A number of authors contributed chapters on various issues. This is the first time that a full, complex picture is presented on the reviewed topic. The two cardinal issues concern (1) the nature of the Egyptian involvement in Late Bronze Age Canaan in general and in Ramesside Canaan in particular (keywords: ethnicity, 'direct rule' versus 'elite emulation'), on which the Egyptian-type pottery sheds light; (2) the chronological value of the reviewed ceramic shapes, many of which function as sensible chronological markers and, in combination with Aegean and Cypriot imports, allow for a refined chronological framework, including revisions of traditional dating.