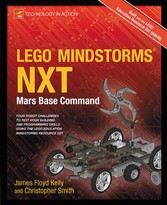 Congratulations! You’re on Mars Base Alpha, the first human outpost on the red planet. Don’t relax, though. It’s not all roses and unicorns up here. Mars isn’t called 'The Bringer of War' for nothing! You’ve just been rained on by a meteor shower and it’s up to you—you!—to put your LEGO MINDSTORMS NXT robotics skills to work to save the day, and the base! And that’s only the beginning of the challenges that lie ahead.
LEGO MINDSTORMS NXT: Mars Base Command is a book of challenge. It’s about challenging yourself to design and build robots to solve problems, tough problems. Taking a similar approach to best-selling LEGO author James Kelly’s other books, this book presents a series of four challenges in the setting of mankind’s first-ever manned base on the planet Mars. Each challenge begins with a backstory to set the scene. You’re given instructions for constructing a playing field, including devices that your eventual robot must manipulate. Your job is to build a robot that will execute the challenge and garner you the most points.
The book requires the LEGO MINDSTORMS NXT Education Resource Set. Scoring sheets are included that allow for the book’s use in educational and group settings. Teachers can base lesson plans around the different concepts taught in each challenge. Groups and clubs can choose to run mini-competitions in which teams or individuals compete against each other in a race to save the base. LEGO MINDSTORMS NXT: Mars Base Command is an excellent choice for an individual, a group, or a teacher wishing to learn about and have more fun with LEGO’s best-selling robotics platform.
Please note: the print version of this title is black & white; the eBook is full color.


James Floyd Kelly is a professional writer from Atlanta, Georgia. He has written numerous books on multiple subjects, including LEGO robotics, open source software, and building your own CNC machine as well as a 3D printer. He is the editor-in-chief of the number one MINDSTORMS NXT blog, The NXT Step (TheNXTStep.com), where he is joined by fellow NXT experts who share their knowledge and designs with other robot fans around the world.