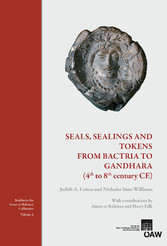 Seals, Sealings and Tokens from Bactria to Gandhara (4th to 8th century CE) - With contributions by Aman ur Rahmn and Harry Falk

Seals, Sealings and Tokens from Bactria to Gandhara (4th to 8th century CE) - With contributions by Aman ur Rahmn and Harry Falk

This volume presents the Bactrian and Gandharan seals, sealings, and tokens in the Aman ur Rahman collection, which span the period from the second half of the 4th well into the 8th century CE. As the largest gathering of such glyptic art in the world, the publication brings this previously little-known collection to public and scholarly attention and places it within the context of the history and culture of the vast crossreads that extended from Afghanistan to Northern India. This area came under the successive control of Sasanian Persians, Hunnic tribes, and Turks, and it was home to such religious beliefs as Buddhism, Hinduism and Zoroastianism. These many influences are reflected in the iconography and style of the seals made and used in the region. In discussing these seals, the author, Judith A. Lerner, draws upon evidence from numismatics and textual remains, as well as from contemporary sculpture, painting, and decorative arts. Supplementing her study are chapters on the seal inscriptions by Nicholas Sims-Williams (Bactrian, Middle Persian and Sogdian) and Harry Falk (Brahmi).