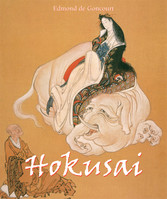 Without a doubt, Katsushika Hokusai is the most famous Japanese artist since the middle of the nineteenth century whose art is known to the Western world. Reflecting the artistic expression of an isolated civilisation, the works of Hokusai - one of the first Japanese artists to emerge in Europe - greatly influenced the Impressionist and Post-Impressionist painters, such as Vincent van Gogh. Considered during his life as a living Ukiyo-e master, Hokusai fascinates us with the variety and the significance of his work, which spanned almost ninety years and is presented here in all its breadth and diversity.