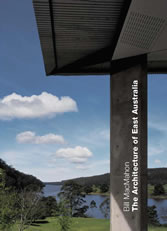 The Architecture of East Australia. An architectural history in 432 individual presentations

The Architecture of East Australia. An architectural history in 432 individual presentations

In 1840 Sir Thomas Mitchell, Surveyor General of the British Crown, chose a rocky promontory on Sydney harbour for his home. He built a cottage in the style of Gothic Revival, popularized in England by Augustus Welby Northmore Pugin and documented in popular copy books shipped with his baggage from his home country. The house perfectly expresses the imaginative dislocation of European culture into the romantic wilderness. Whether they came out of duty, like Mitchell, or in the hope of opportunity, the European immigrants viewed Australia as a »terra nullius«, as an empty land, a vacant space waiting to receive a model of Christian civilization. It took a century to realize that the dream did not comfortably fit the continent. The story of Australian architecture might be said to parallel the endeavours of Australians to adapt and reconcile themselves with their home and neighbours. It is the story of 200 years of coming to terms with the land: of adaptation, insight and making do. Early settlers were poorly provisioned, profoundly ignorant of the land and richly prejudiced towards its peoples. They pursued many paths over many terrains. From the moist temperate region of Tasmania with heavy Palladian villas to the monsoonal north with open, lightweight stilt houses, the continent has induced most different regional building styles.
The buildings included within this guide extend from the first examples of Australian architecture by convict architect Francis Greenway to the works by today’s rising generation. It covers not only buildings by such famous architects as Walter Burley Griffin, Harry Seidler, Jørn Utzon, John Andrews, Philip Cox and Glenn Murcutt, but also many high-quality works by less known exponents of the profession.
Photographs by the renowned Max Dupain and the present proprietor of his firm, Eric Sierins, including many especially commissioned for this book, support the text. Contributing authors have supplied material where vital local knowledge is essential.
Bill MacMahon is an architect practising in Sydney, a lecturer at the University of New South Wales and a contributor to various Australian architectural and design journals. He is best known for his work with D4Design whose projects included the Rockpool Restaurant and the Regents Court Hotel.