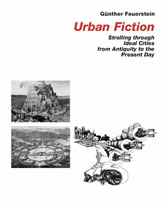 Dissatisfied with the world we live in, we have been longing since time immemorial for two opposing topoi: the peaceful garden â a carefree paradise â and the New City â a harmonious community. Thomas More described this New City: it is Utopia, no-place, or Eu-topia, the fortunate place, and it is located on an island. But long before More philosophers, saints, artists, and travelers described the ideal city. And after him hundreds of architects, writers, reformers, and dreamers sought to find Utopia and not only described but also depicted the fortunate cities â which were often terrible as well â and occasionally tried to turn them into a reality. Take Palmanova, Freudenstadt, Guise, Brasilia, Lingang. Yet these cities, too, then as now, have turned out to be imperfect, deeply rooted in their own period.
For GÃ¼nther Feuerstein, all these cities and towns, though only fictitious, have long since been built, and he strolls through them together with the architects, planners, writers, and philosophers, just as Thomas More, Antonio Filarete, William Morris, and many others once led us through their cities. Though the routes through various periods and continents are arbitrary, the tour of 350 cities, many of them made visible in over 500 illustrations, and overflights of 800 additional dream cities result in a kind of lexicon of the ideal city, which admittedly does not claim to be complete.

GÃ¼nther Feuerstein, who was a professor at the Hochschule fÃ¼r Gestaltung in Linz and also a lecturer at the Akademie der bildenden KÃ¼nste and at the Technische UniversitÃ¤t in Vienna until his retirement, must be considered the catalyst in the Viennese post-war architectural scene, as almost all architectural avant-garde groups of the town have come from his circle. As an author, Feuerstein addresses areas where art history and sociology intersect with architecture. Edition Axel Menges has published Androgynos â Das Mann-Weibliche in Kunst und Architektur / The Male-Female in Art and Architecture and Biomorphic Architecture â Menschen und Tiergestalten in der Architektur / Human and Animal Forms in Architecture. Feuerstein is one of the earliest critics of functionalism and pleads for an Â»expanded architectureÂ«.